Earning a nod on the All-SCAC Second Team for starting pitcher was senior Luciano Villanueva (San Antonio, Texas). Receiving this honor marks consecutive years Villanueva has claimed a place on the all-conference second team, but is his first as a pitcher.

Villanueva performed well on the mound for the Crusaders, tossing three complete games – two of which were nine innings and helped garner a pair of SCAC Pitcher-of-the-Week accolades. The second time named was a Co-SCAC Pitcher-of-the-Week recognition, after the right-hander delivered a two-hit shutout, with a career-high nine punch outs in a 2-0 triumph at Southwestern University.

Villanueva capped his campaign with the final 1.1 innings of an eventual 10-inning walk-off victory over No. 18 Centenary College. That decision reflected a 3-3 record for Villanueva, as he was charged the W in the Crusaders’ final contest. Overall, Villanueva made nine appearances (seven starts). He logged 39.2 innings pitched, struck out 21, and also had a save in the season-opener series at Sul Ross State University.

Freshman Thomas Martin (Vancouver, Wash.) etched his name among those with an All-SCAC Honorable Mention. Martin paced Dallas in his debut season by batting a .351 average, totaling 46 hits, driving in 24, and totaling 51 total bases. Martin tied the team-high in doubles with five.

At one point this season, Martin carried a team-long and personal best 13-game hitting streak. The first baseman/outfielder capped his impressive spring on a seven-game hitting stretch. Martin ended having reached base in 23 games, and included punching 21 hits in contests during that span.

To view complete release from the SCAC, click here. 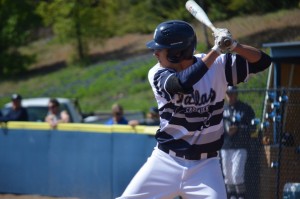