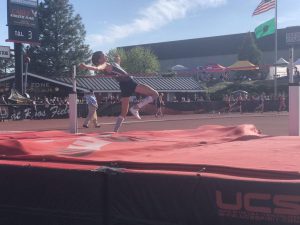 Ellie Saunders is the WIAA 1A Girls State High Jump Champion with a school record of 5’5! Jerrica Pachl took 2nd with a final jump of 5’3!

It’s only fitting these two finished first and second this year as they were tops in the league all year trading first and second places throughout the season in league meets. Both athletes were coming into this week’s state finals having stood on the podium before. Ellie finished 6th as a sophomore last year and Jerrica finished 8th two years ago as a freshman! Jerrica did not jump in last years track season coming off a knee injury. The two teammates pushed each other all year with no clear favorite coming into the state finals.

As Thursday’s competition proceeded there were 13 girls who reached the 5 ft height. By the time the jumps were at 5’2 it was Ellie and Jerrica at 1st and 2nd! Jerrica reached a height of 5’3 and Ellie went on to set a new school record at 5’5 and bring home the 1A Girls High Jump State Title!

Coach Pyatt was so proud of these girls saying: “They reached the 5ft height and then just started jumping for the sky! They competed all year and really competed in this meet!”

Jerrica will also compete in the 400m and the 4oom relay events!