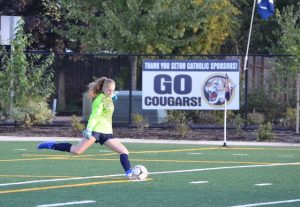 Young would be a good word to use when describing the 2019 Seton Catholic Girls Soccer Team. With 5 freshman and 6 sophomores the Cougars are going to need to learn on the fly this year as they opened with always tough 2A Woodland Tuesday evening.

The Seton girls held the Beavers scoreless for the first 35 minutes of the game. With 5 minutes left in the first half a scramble in front of the Seton goal ended up with the ball in back of our net and a 1-0 Woodland lead.

Seton, playing with multiple players out with injuries continued to fight through the second half until fatigue caught up and the Beavers were able to find the back of the net 4 more times late in the 2nd half for a 5-0 win.

The score was not indicative of the effort our girls gave and doesn’t give justice to the amazing performance in goal by senior all league goalie Kate Willis. Willis kept the Cougs in the game and with a fighting chance with multiple saves, many of them outstanding athletic reactions to some very well placed shots by the Beavers. Willis ended up with a Seton record 21 saves on the night!

The girls return to the pitch Thursday evening for a non league game at Westside Christian 6pm!