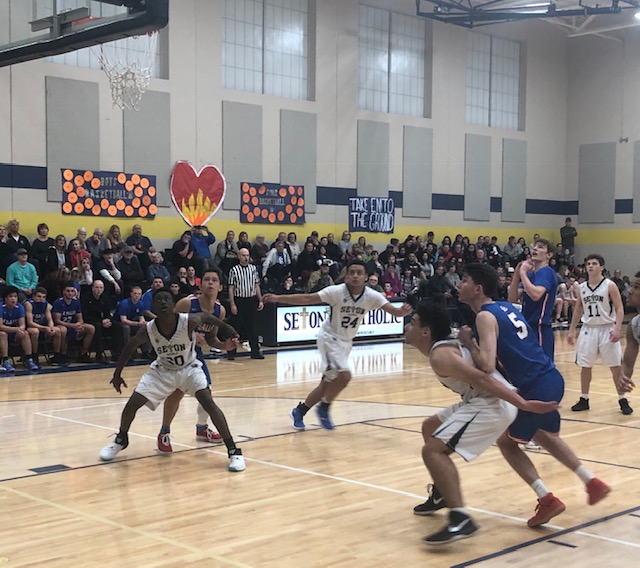 In the first ever meeting between the two schools the Boys Varsity Basketball team closed out their non league season with a four point win over the 8th ranked La Salle Falcons of Portland. In another first in Seton Catholic History Isaiah Parker became the first Seton Catholic Basketball Player to score 1,000 points in their varsity career!

The gym was packed with a large crowd including a large number of Seton alum returning for the Cougars Alumni night! It was a perfect atmosphere as the Seton Cheer team made sure the home crowd was an effective 6th man!

The first quarter was played at a pace that favored the Falcons as they took their time running a deliberate offense and not shooting until late in the shot clock. This limited the Cougars chances of getting run outs and at the end of the first it was 13-11 Seton. the 2nd quarter wasn’t much different as Seton managed only 11 points in the quarter to La Salle’s 13 and the teams went into the half all tied at 24 each.

It was a different Seton team that took the floor for the third period as the fast paced Cougars that we’re accustomed to seeing went on a 27-14 run in the third sparked by Andy Olson’s two three pointers, a three by Delano Morgan and six points by Gabe Anderson. The Cougs went into the fourth with a 13 point lead and all the momentum.

The fourth started like the third and it looked like the Cougs may just run away with it but things quickly turned as the Cougs got careless with the ball, sloppy on the defensive end, and La Salle capitalized on the repeated mistakes. With 1 minute in the game we were all tied up and the game was going to go down to the wire. With under a minute to play Isaiah Parker found Delano Morgan under the hoop for the go ahead basket. La Salle failed to score at the other end and Isaiah Parker iced things from the free throw line giving Seton the four point lead with 8 seconds remaining. La Salle’s final shot fell short and Seton celebrated the 4 point victory over a very strong La Salle program.

On a night the Cougs found it tough to get the ball to drop Coach Small was pleased with the team’s effort saying “it was a great team win. Each and every player contributed to this outcome.”

Becoming the first 1000 point scorer in Seton history, Isaiah Parker, along with Gabe Anderson led the Cougs with 13 points each. Delano Morgan scored 8 points while Malik Williams chipped in 7 along with some outstanding defense. Kellen Ball added 6 points for Seton.

Seton ends it’s preseason at 8-2 and will have the next few days off before next week’s Tri Co League Opener against defending League and District Champs the La Center Wildcats Thursday Jan 3rd at home. JV 5:30pm/Varsity 7pm!

Troy Owen will once again be on the grill! Invite the family and bring your appetites!

Congrats Boys on a great preseason! Congrats Isaiah on your 1,000th point!