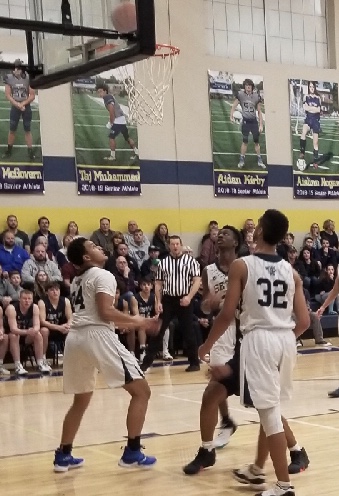 The last four times King’s Way Christian and Seton Catholic have met in boys basketball it has been four incredibly intense games that all came down to the final minutes. Tonight was no exception as both teams came in looking for a big win and remain near the top of the Tri Co League standings. This was sure to be a barn burner and the both teams did not disappoint as this was an outstanding high school basketball game from start to finish.

Seton came out firing as they immediately jumped to a 9-2 lead and forced King’s Way into a quick timeout. As always Coach Harmeling’s Knights had an answer and soon the Knight’s erased the Cougs lead and by the end of the first quarter the Knights led by five 25-20 over the Cougs.

The second quarter was a defensive stand by both teams as they both began to shut down the lanes and limit easy opportunities that were there in the first period. Neither team got rolling the in second and by the end of two it was 36-33 King’s Way.

The third quarter was just like the 2nd with neither team scoring at all in nearly the first two full minutes of the half. Both teams played very physical tough nosed half court man to man defense and at the end of the third the Knight’s lead was down to two and once again we were in for a thriller!

In the fourth quarter it was all Seton as they got out to a fast start and never looked back! Seton built as much as a 12 point lead in the final period including a two handed power dunk by Xavian Rushing with two minutes to go! Seton went on a 25-15 run for the fourth quarter and the last two minutes of the game were never really in jeopardy as the Knight’s had to try to stretch the time by fouling. The Cougs converted on their free throws and the game never got closer than 8 points!

Coach Small was extremely pleased with his teams effort saying: ” I’m really proud of our guys resilience. They were relentless and made plays when we needed them. I’m very proud of all their efforts.”

The Cougs will have Wednesday off and then play host to Castle Rock Thursday! JV 5:30pm/Varsity 7pm!

Once again Troy Owen is on the grill! And he’s cooking up some teriyaki burgers! Bring the family and your appetite!